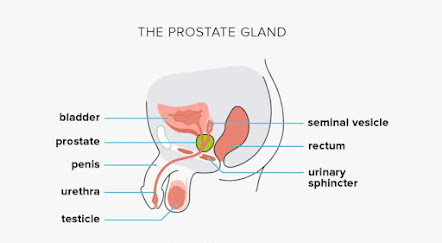 Prostate cancer occurs when abnormal cells in the prostate gland grow uncontrollably, resulting in the formation of a malignant tumor.

Although it is a common form of cancer in men, prostate cancer is very treatable in its early stages. The prostate gland, which is located between the penis and the bladder, is where it starts.

The prostate serves a number of purposes. These include releasing PSA, a protein that helps semen maintain its liquid state, producing the fluid that nourishes and transports sperm, and assisting with urine control.

Early prostate cancer frequently has no symptoms, but screening can find changes that might be cancerous. Using a test, screeningTrusted Source can determine how much PSA is present in the blood. High levels imply the possibility of cancer.

Some symptoms one with prostate cancer may notice include:

-Weak or unplanned urine flow, or having to make extra efforts to empty the bladder

-The urge to urinate frequently at night

-Blood in the urine

-Pain or burning during urination, which is much less common

-Discomfort or pain when sitting, caused by an enlarged prostate

-Pain or stiffness in the lower back, hip, pelvis or thighs.

It’s important to be checked over by a doctor for adequate counseling and medical intervention.