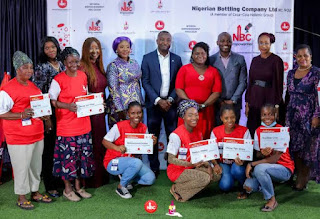 Over 125 women in Lagos have been trained in different skills by Karis and Eleos Hand of Hope Foundation in partnership with Nigerian Bottling Company (NBC).

The women who were trained in skills such as baking, make-ups, tie and die, cleaning detergents, bead making among others were drawn from  Alausa and  Agidingbi  area of Lagos state. They were also  given a start- up kits by the NBC.

Speaking at the closing ceremony of the training which came under the theme, “empower her’’,  wife of the Lagos state governor, Ibijoke  Sanwo–Olu described women empowerment as one of the potent weapons to fight poverty and build a successful  society.

According to Ibijoke who was represented by,  Abimbola , when women are empowered  and supported to thrive in their  businesses and careers, they  stand a better chance to build their homes properly  which in turn  would have  a positive multiplier effect on society  at large.

In her words: ‘’The result of what happened in a given society is a reflection of what obtains in the homes.

‘’The  home is the microcosm of society and therefore, there is need for constant efforts  aimed at ensuring  that our homes  are in proper shape, and the role of women as home managers cannot be trivialised.

However she commended NBC and the NGO for the initiative to empower the women to be financially independent thereby drastically poverty  and rejuvenating  self- awareness.

The first lady of Lagos stressed  the need for more efforts to be made so  as to reach out for more women especially  in the underserved areas and peri-urban communities  in order to drastically  reduce the poverty index in the state and country.

Speaking also, director, corporate affairs  and sustainability  of NBC, Nigeria West Africa , Ekuma Eze  described the training as one of the ways his organisation is giving back  people as well as  part of activities to mark the 70th anniversary  of the company in Nigeria.

Eze therefore called on the beneficiaries to ensure they put in proper use all that they were taught during the training.

On her part, founder Karis  and Eleos  Hand of Hope Foundation , Bukola Bamiduro said the project which kicked some months ago  hoped to benefit eight states  across the country.

While lauding NBC for supporting her organisation, she said such partnership would go a long way in eradicating poverty among the participants.

Besides, training the women on skills, she said her organisation also trained them on mental health adding that most women fail in their businesses because they do not have settled homes.

On the other hand, she urged the beneficiaries to be committed with their businesses as such would enable them record huge success.

Lagos state commissioner of Women Affairs and Poverty Alleviation, (WAPA) Cecilia  Dada who was represented by  Funmilayo Raji of the office of the NGO (WAPA) commended the organisers for positively impacting the lives of the women.

Some of the beneficiaries who spoke at the event lauded the organisers for impacting them with knowledge and skills that will in turn transform their lives.