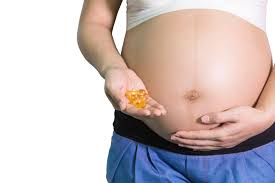 By Chioma Umeha
A new study has linked low intake of omega-3 with rise in childhood asthma. The researchers said that taking fish oil during the third trimester of pregnancy could reduce a baby’s risk of developing asthma by almost a third.
The study, published Thursday, in the New England Journal of Medicine, was conducted by the Copenhagen Prospective Studies on Asthma in Childhood (COPSAC) at the Copenhagen University Hospital, with testing done at the University of Waterloo (UW).
“We have long suspected there was a link between the anti-inflammatory properties of long-chain omega-3 fats, the low intakes of omega-3 in Western diets and the rising rates of childhood asthma,” Hans Bisgaard of COPSAC said in a release.
“This study proves that they are definitively and significantly related.”
Fish oil and olive oil
For the five-year study, 736 pregnant women were asked to take 2.4 grams of either fish oil or the placebo olive oil daily starting at 24 weeks of gestation.
The study was a double-blind test, meaning neither the researchers nor the women knew who was taking which supplement.
Researchers were able to follow up with 695 children for their first three years, and again when they were five years old.
The risk of asthma in the children whose mothers took fish oil was 16.9 per cent compared to 23.7 per cent for the children of mothers in the placebo group, the study found.
Asthma is a chronic inflammatory disease of the airways that can cause a shortness of breath, coughing, wheezing and tightness in the chest. Statistics Canada reported in 2010 that 8.5 per cent of the population aged 12 and older has been diagnosed with asthma.
The Asthma Society of Canada reports it is most common during childhood and affects at least 12 per cent of Canadian children and is a major cause of hospitalization.
Asthma prevention
Long-chain omega-3 fatty acids, which include eicosapentaenoic acid (EPA) and docosahexaenoic acid (DHA), are found in cold water fish, the researchers said.
The study also involved testing the levels of EPA and DHA in the pregnant women’s blood – testing that was led by Ken Stark, Canada Research Chair in nutritional lipidomics and professor in the faculty of applied health sciences at the University of Waterloo.
He also said that the testing was comprehensive and thorough. The blood of the mothers was tested before, during and after they took the supplements.
The tests they did were a rapid analytical technique developed by Stark as a low-cost, quick alternative to traditional tests. The lab at UW is one of the few labs in the world equipped to run them.
It was important to get it right because there have been many studies on fish oil where researchers were not as thorough, which has created confusion about whether fish oil is beneficial.
“The neat thing about this study is the quality,” Stark said. “One of the key things was actually using that blood indication so you really know who was taking it, who wasn’t taking it.”
The testing was able to show women with low blood levels of EPA and DHA at the start of the study benefited the most from taking fish oil – it reduced their children’s risk of developing asthma by 54 per cent.
“The proportion of women with low EPA and DHA in their blood is even higher in Canada and the United States as compared with Denmark. So we would expect an even greater reduction in risk among North American populations,” Stark said in a release.