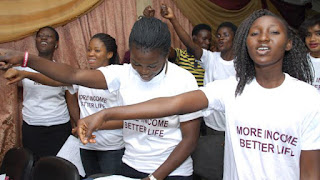 By
Chioma Umeha
In line with the holistic analysis of the Girl-child based on the 1995 UN fourth World Conference on Women, Beijing conference which seeks among others strategic objective to eliminate all forms of discrimination against her, a non-governmental organisation, Mercy Corps Nigeria has tasked media practitioners on girl child abuses reportage in the country
Speaking at a one day seminar on reporting Violence Against Women and the Girl Child in Lagos, the Acting Programme Coordinator of Mercy Corps Nigeria, Magaritta Omojola said in her opening remark that the media is the watchdog of the society and should propagate the protection of the girl child through its reportage.
The United Nations gave a holistic analysis on who a girl child is and defined certain strategic objectives to protect her.
The objective also includes: Eliminate negative cultural attitudes and practices against girls, promote and protect the rights of the girl child and increase awareness of her needs and potential?, eliminate discrimination against girls in education, skills development and training, eradicate violence against the girl-child, eliminate discrimination against girls in health and nutrition.
Omojola, while stressing on the role of media to propagate the rights of the girl child said that her organisation has in the past three months engaged on skills development and training as well as sensitising young girls on their rights.
While condemning every form of   abuse and neglect, including, physical and emotional ill treatment against children, especially girls, she said that her organisation is currently working with 18,000 marginalised girls in Lagos state.
Omojola explained that the major project of her organisation is to ensure that marginalised in-school girls improve their learning outcomes in a supportive environment.
To do this, she said the girls participate in weekly learning space activities over a nine-month period to receive academic tutoring as well as employment readiness skills including financial education and leadership skills.
Noting that Lagos state currently has 8,000 out of school girls, Omojola added that it is partnering with the Coca Cola Company to support them.
She also said that the Coca-Cola Company is partnering with the UK Department for International Development’s Girls Education Challenge in its Educating Nigerian Girls in New Enterprises (ENGINE) programme, an initiative to improve learning outcomes and the economic status of marginalised adolescent girls aged 16 and 19 in the North States.
These include: Kano and Kaduna, the Federal Capital Territory (FCT) and the metropolis of Lagos.
ENGINE is guided by Coca-Cola’s 5by20 initiative to economically empower five million women in their global value chain by 2020.
ENGINE aims to improve the lives of 18,000 marginalised girls drawn from Lagos and the northern states of Kano, Kaduna and the FCT by improving the quality and reach of education and ensuring new educational opportunities translate into real economic and social choices for girls, she said.
This includes a projected 5,400 marginalised girls currently enrolled in school and more than 12,600 marginalised girls currently out of school.
In Lagos state, almost 2,000 girls were supported with grants of 100,000 Naira, the acting Programme Coordinator said, adding that the least amount received was up to 40,000 Naira. She further said that Mercy Corps organised internship programmes following which some of the participant were employed.
She said: “ENGINE’s Theory of Change states that when marginalised Nigerian girls complete education and training cycles and are supported by gatekeepers they will be more skilled employees and have increased earning power and increased decision-making within the household.
“This Theory of Change will be supported by ENGINE’s objectives and activities and will contribute to the overall impact of improved life chances for marginalised girls, while simultaneously providing further evidence that improved female education contributes to economic growth, reduced poverty and a range of other social and environmental benefits.”
Speaking on challenges, policies and what media practitioners can do to stem child rights abuses, the Chairperson, National Association of Women Journalists (NAWOJ) Lagos State Chapter, Hajia Sekinah Lawal said ending girl child abuse and related issues is a task for all because ‘it is about our daughters, our wives, our sisters and the likes.’
She however added that journalists play very vital role as agenda setters, policy influencers and watchdog of the society, hence, there is the need to encourage Journalists to do more on the issue of girl child by writing and raising issues around the girl child.
Giving her presentation, titled: “Understanding Various Forms Of Abuse Against The Girl Child,” Mrs. Yinka Shokunbi, National Secretary, Network of Reproductive Health Journalists of Nigeria (NRHJN)? said the United Nations Convention on the Rights of the Child defines a child as ‘’a human being below the age of 18 years unless under the law applicable to the child, majority is attained earlier”.