Save The Children Signs 3-Point Agenda MOU With Lagos State 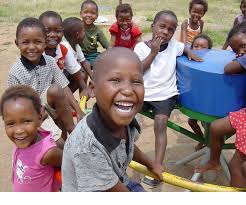 Save the Children, an international non-governmental organisation has announced plans to roll out Rota Virus, a vaccine for children under five years of age. This was made known to the journalists last week at the occasion of signing of the Memorandum of Understanding (MOU) between the non-governmental organisation and Lagos State government at Alausa secretariat, Ikeja, Lagos.
According to Mr. Roy Chikwem, an Area Operations Manager, Lagos and Cross River, Save the Children International, the Memorandum of Understanding sets out clear commitments by both parties to achieve the overall goal of reduced mortality rates in children under five years through evidence based interventions.
The MOU will also build trust between the two parties and improve the predictability of behaviour of both sides to achieve the overall goal of reduced mortality rates in children under five years through evidence based interventions in nutrition, child survival- maternal, newborn care and child health. Other evidence based interventions will education be in the areas of education, children protection and better support for frontline health workers.
While explaining the modalities the organisation work in the State Chikwem said, Lagos State has infrastructure in the Local Government Areas (LGAs) which they intend to leverage on to carry out the humanitarian activities.
“Therefore, what we are trying to do is to partner with them. For example, we have a project called Stop Diarrhea Initiative (SDI). So we have been working in Shomolu, in partnership with the State and have been able to implement several initiatives in the LGA.
“Within these five years, we should be able to see how we can bring resources together, partner together and implement change in the LGAs. At the moment, we are about to roll out the Rota Virus which is a vaccine for children which prevents diarrhoea and we are already partnering with the State, using our personnel to introduce this vaccine in Shomolu,” he said.
The MOU signed which was signed within the week has three-point agenda which includes: Stop Diarrhea Initiative (SDI). This is a four-year project aimed at reducing under- five child deaths and morbidity due to diarrhea by implementing the United States Children Fund, UNICEF-WHO(World Health Organisation) Seven-Point Plan on the control of diarrhea in Shomolu LGA.
The second one is Health Worker Capacity Building (HCB) Project, which is a three-year project focused on building the capacity of health workers in Lagos, Gombe and Kaduna States to deliver quality MNCH services.
While the third point agenda of the MOU is Systems Transformed for Empowered Action and Enabling Responses for Vulnerable Children and Families (STEER). This is a five-year project supported by USAID/PEPFAR. STEER seeks to improve the well-being of orphans and other vulnerable children (OVC).
Explaining the importance of the partnership with the NGO, Mr. Adetayo Bankole, Director Development Partnerships Department, who represented the both Commissioner and Permanent Secretary of Ministry of Economic Planning and Budgeting during the occasion, said that Lagos State is one of the States that is ready to coordinate the activities of all the different partners.
Bankole said: “If the activities of partners are not coordinated, the activities may not have impact on the life of citizenry, there may be a kind of clustering of the activities. But, we assist different partners during the development of annual work plan, because all of them must have work plan. The purpose of this is to support the State government.
“The State government cannot do it all alone and the State government should be able to know that where they suppose to spend some funds, the various partners are already there. Such monies that could be spent in such areas would be saved for other areas. That’s one of the reasons while we have this department,” he said.
Specifically explaining the state government’s roles in the partnership, Bankole said, “we should be able to coordinate the activities, we don’t want clustering; some local government may not even know that we have some partners in the State. We have some LGAs and CDAs where many different partners are operating.
He however implored the non-governmental organisations to further expand their scope in the State.
“The Save the Children has been assisting the State in eradicating diarrhea. They have been operating in Agege, Bariga and Shomolu. In Lagos state, we have 57 local government areas, 20 LGAs and 30 CDAs, how could it be only three that would be benefiting from the activities of Save the Children. That’s what we are telling them, if they involve us in their annual work plan we will be able to tell them where to spread their nets.
Speaking further, he said, “If you(a partner) are not recognised by the Ministry of Economic Planning and Budgets, the fund channelled to development will just be going down the drain. The money being spent may not have impact on people and the reason for having different partners is for them to help the government in saving some funds.
“As we are talking of diarrhea now been handled by Save the Children once government knows that they are spending money on such, the money that the government supposed to spend on eradication of diarrhea in the State will be channeled to another project.
The Director therefore implored the general public to cooperate with the non-governmental organisation.
While expressing his optimism in the partnership, Chikwem, the Area Operations Manager, stressed that he wants the general public to know that Save the Children’s core mandate is to safeguard children.
“We hope that this partnership will be able to expand our work and we will be able to reach more beneficiaries, more people which may be hard to reach, that is what we are hoping that this partnership will bring to us,” he added.