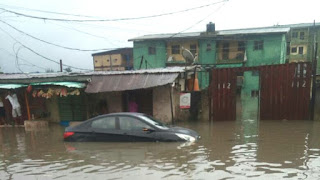 The Minister of Health, Prof. Isaac Adewole has called on development partners to assist the government-led efforts, saying there will be great need for maternal, neonatal and children health interventions and adequate provision for life saving drugs.
Adewole who has been monitoring and coordinating the health ministry’s intervention noted that the Federal Medical Centre in Makurdi has been on ground deploying medical personnel involved in surveillance and follow-up activities to those affected by the flood. so far in the response to the flood.
He said: “Our emergency medical camp opened at the International market in Makurdi have thousands of  people registered already,  which is increasing on an hourly basis as more residents are reporting for medical check – up as we have embarked on a sensitization campaign using the state owned electronic media.
“We have also established communication and escalation path with Benue State SEMA with clear instructions to refer all emergencies and advanced critical cases to FMC.  The Federal Medical Centre has effected and issued circular mandating Hospital staff to provide treatment for all Flood Patients at no cost.”
According to Adewole “4775 people are in the camp including; Men 531, Women 642, Children 1387, under five 582, pregnant women 92, lactating mothers 115 and 74 persons living with disabilities.”
“The victims of Makurdi flood are in our thoughts and prayers. We urge our development partners to join hands with us as our colleagues continue providing Emergency Medical Relief and Psyco-Social care to victims,” he said,
The Federal Ministry of Health in collaboration with Benue State Government Emergency Management Agency is working round the clock to assist citizens affected by the unfortunate incident and ensure the control of diseases that may arise as a result of the hazardous contamination of the lower and upper basin of the water such as communicable water-borne diseases, gastrointestinal and upper respiratory tract infections.