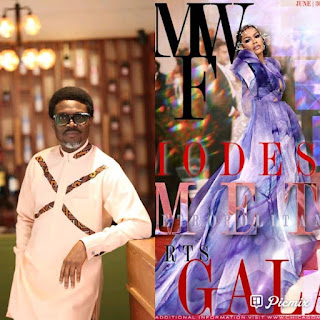 Lexy Mojo-Eyes, an African fashion ambassador, is nominated to receive yet another special recognition award at the upcoming International Arts Awards Gala and Fashion Week, which will take place in Chicago, Illinois, from June 30 to July 3, 2022.

The International Arts Awards Gala and Fashion Week serves as the centerpiece of Al Nisa Designs, which is owned by African-American modest fashion designer Carmin Muhammad, who is also the driving force behind "Women Working Together Inc."

Muhammad, a Los Angeles native, became well-known worldwide after her article titled "Pink Hijab Ladies stole the show at Torino Fashion Week" went viral. Since then, she has not turned around.

The second iteration of the first-ever U.S. Modest Fashion Week will honor trailblazers who paved the way for aspiring designers from various backgrounds and will have, among others, 25 international designers and 80 models as part of its "Fashion is an Ambassador to World Peace" theme.

Mojo-Eyes is being honored in recognition of his enormous contributions to the African fashion industry over the past three decades, which have in large part shone a spotlight on the industry and gained it recognition and patronage on a global scale.

Dedicatedly transforming his vision to make Africa the future of fashion globally, the pioneering African fashion promoter and entrepreneur has been at the forefront of promoting African fashion for close to three decades, and given the attention it has received, it would appear that the future is now.

The manifestations of African fashion in more recent times continue to be magnets of attraction, inspiring and luring masses of people into union with their beauty and novelty after thirty years of pushing the boundaries of African fashion towards inclusivity and global reckoning.

As time goes on, Mojo-Eyes' unrelenting efforts to promote African fashion continue to entice pilgrims to its fairs from the Sahel to the savannah and rain forests as they travel across various trade routes.

An impressive number of influential designers have been influenced by the brains behind Africa's leading fashion promoting firm. Mojo-Eyes has not only staged and participated in massive transcontinental fashion exhibitions to raise awareness - from fashion weeks in Lagos to Milan, New York, Paris, Dubai, and the United Kingdom, among others - but has also perfected digital savvy.

With an increasing number of platforms for designers to promote their brands to a mass market, providing new sales avenues for fashion and other consumer goods, he recently launched Agogo Africa, an e-commerce marketplace for African fashion designers and creatives where their products are marketed all over the world at no cost to them, with special discounts on all shipments worldwide courtesy DHL.

Mojo-Eyes is regarded as the iconic figure behind the revolution that has defined African fashion for the past three decades. He is best known for advancing the essence of the African fashion industry by encouraging African designers to look inward to the rich peculiarities embedded in African culture in order to project African fashion towards global recognition, inclusion, and economic viability.