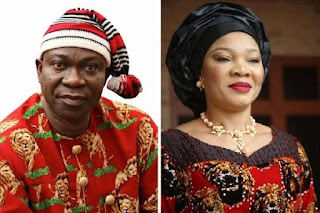 The Senate has agreed to send a high-level delegation to the UK government to discuss the ongoing trial of former Senate Deputy President Ike Ekweremadu and his wife, who are being held on alleged organ harvesting charges.

The Senate President, Ahmad Lawan, announced that a delegation from the Foreign Affairs Committee would leave Nigeria for London on July 1, 2022. Lawan stated this in plenary on Wednesday while discussing the outcome of a closed session that began at 10:57 a.m. and ended at 11:49 a.m. He stated that the Upper Chamber's decision to intervene in the matter was based on a briefing from Nigeria's High Commissioner in London.

According to him, the Senate will consult with the Ministry of Foreign Affairs and the Nigerian High Commission in London regarding Senator Ike Ekweremadu's recent arrest by the London Metropolitan Police in the United Kingdom.

"I had a personal meeting with our Nigerian High Commissioner to the United Kingdom, Alhaji Isola Sarafa, who has done so well in establishing contact with our colleague, who has been able to get his team to be in the court at Uxbridge where Ekweremadu was taken."

"The High Commission has also been able to provide some consular services, including the hiring of lawyers to defend our colleague."

"We applaud them for paying attention to the issue at hand." Likewise, the Nigerian Foreign Affairs Minister has come here to ensure that the Ministry of Foreign Affairs takes steps to provide diplomatic support for our colleague.

"Because this matter is already in court, we have limited time to discuss anything beyond what we have done thus far."

"However, I want to reassure Senator Ike Ekweremadu's family and Nigerians that the Senate will continue to work with our ministry of foreign affairs and our high commission in London."

"The High Commission has done so much, but we still expect it to provide any additional consular services."

"We have also authorized our foreign affairs committee to engage with the British high commission here in Nigeria to find out more information about this case, as far as the high commission is concerned."

"I would like to implore all federal government institutions that can do anything to ensure that Justice prevails in this case to do so," said Senate President.